Today is the Leavetaking of the Feast 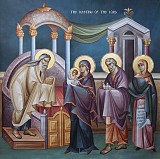 Rejoice, O Virgin Theotokos, Full of Grace! From you shone the Sun of Righteousness, Christ our God, enlightening those who sat in darkness!
Rejoice and be glad, O righteous Elder; you accepted in your arms the Redeemer of our souls, Who grants us the Resurrection.
Troparion of the Feast

The Creator of the Law, in fulfillment of the Law, was brought to the Temple and presented to the Lord, for the external aspect of this great event in the Gospel narrative was in conformity with the rules laid down in the Old Testament. The Lord said to Moses, “Consecrate to Me all the first born; whatever is the first to open the womb among the people of Israel, both of man and of beast is Mine.... And when in time to come your son asks you, 'What does this mean?' you shall say to him, 'By strength of hand the Lord brought us out of Egypt, from the house of bondage. For when Pharaoh stubbornly refused to let us go, the Lord slew all the first-born in the land of Egypt, both the first-born of man and the first-born of cattle. Therefore I sacrifice to the Lord all the males that first open the womb; but all the first-born of my sons I redeem' (Ex. 13:1-2, 14-15).

And so Mary and Joseph came after forty days of purification to the Temple to offer a sacrifice according to what is said in the law of the Lord, “a pair of turtledoves, or two young pigeons” (Luke 2:24). The original Old Testament prescription that the firstborn must be consecrated to the service of the Lord was now done by substitution: ...the firstborn of man you shall redeem, and the firstling of unclean beasts you shall redeem. And their redemption price (at a month old you shall redeem them) you shall fix at five shekels in silver, according to the shekel of the sanctuary... (Num. 18:15-16). These five shekels evidently symbolized the coming redemption of us by the Savior — His five wounds on the Cross.

The harsh way of the Cross, portent with profound significance, brought Son and Mother, the God-Man and she who is “more honorable than the Cherubim and more glorious, beyond compare, than the Seraphim,” meekly to the Temple at Jerusalem, and the Liberator and Redeemer of the world was Himself redeemed for so trifling a sum.

Now there was a man in Jerusalem, whose name was Simeon, and this man was righteous and devout, looking for the consolation of Israel, and the Holy Spirit was upon him And it had been revealed to him by the Holy Spirit that he should not see death before he had seen the Lord's Christ. And inspired by the Spirit he came into the temple; and when the parents brought in the child Jesus, to do for Him according to the custom of the Law, he took Him up in his arms and blessed God and said, “Lord, now lettest Thou Thy servant depart in peace, according to Thy word” (Luke 2:25-29).

This was the crossroads between the Old Testament and the New. St. Simeon symbolizes the departing Old Testament, exemplified by men of righteousness and prophets who in spite of all their doubts and searchings entertained the firmest faith in what had been foretold of the promised salvation. The righteous Simeon took Him up in his arms, and the Old and New Testaments stood together: the Old, departing, held in its arms and blessed the New. This was unity and continuity, a direct link and a development; the Law and the promised manifestation of the Grace of God as His Only-Begotten Son, the Redeemer.

To Simeon the God-Receiver was granted more than had been granted to any other man before him: he held the Almighty in his arms, and to him were revealed both the Glory and the Way of the Cross of his God: “for mine eyes have seen Thy salvation which Thou hast prepared before the face of all people, a light to enlighten the Gentiles and to be the glory of Thy people Israel.” And His father and His mother marveled at what was said about Him; and Simeon blessed them and said to Mary His mother, “Behold, this Child is set for the fall and rising of many in Israel, and for a sign that is spoken against (and a sword will pierce through your own soul also), that thoughts out of many hearts may be revealed” (Luke 2:30-35). Thus, for the first time, the Most-Holy Mary was forewarned that there would be no end to the thorns and trials of her life, that her Son, while bringing light and spiritual renewal to all peoples, would Himself be so persecuted that a sword will pierce through your own soul also.

The Lord wished for moral harmony in spreading abroad this holy news, and so He wished a woman, too, to repeat what had been said by Simeon: And there was a prophetess, Anna, the daughter of Phanuel, of the tribe of Asher; she was of a great age, having lived with her husband seven years from her virginity, and as a widow till she was eighty-four. She did not depart from the Temple, worshipping with fasting and prayer night and day. And coming up at that very hour she gave thanks to God, and spoke of Him to all who were looking for redemption in Jerusalem (Luke 2:36-38).

Just as in Palestine in ancient times, we bring our children on the fortieth day to be presented to the Lord; but in contrast to the Israelites, we bring children of either sex. In the Presentation, Christ, the Firstborn of all the human race, Creator of the New Church and of the New Testament, filled the old rites with a new content. By bringing our children to church like the Most-Pure Virgin Mary, we bind them over to God. Baptized and sanctified by grace, our children, by being made members of the Church, take their first steps upon the way of grace and the way of the Cross that lies before those who would follow Christ.

So we must go out to meet Christ and receive Him, taking Him into the arms of our souls, begging leave for sin to depart from us that we may live our lives in peace and tranquility, free of the agitations of evil. St. Simeon gave us an example of how firmly to follow the path of a righteous life, filled with the expectation of a meeting with the Lord.

By Thy Nativity, Thou didst sanctify the Virgin's womb and didst bless Simeon's hands, O Christ God. Now Thou hast come and saved us through love. Grant peace to all Orthodox Christians, O only Lover of Man!
Kontakion of the Feast